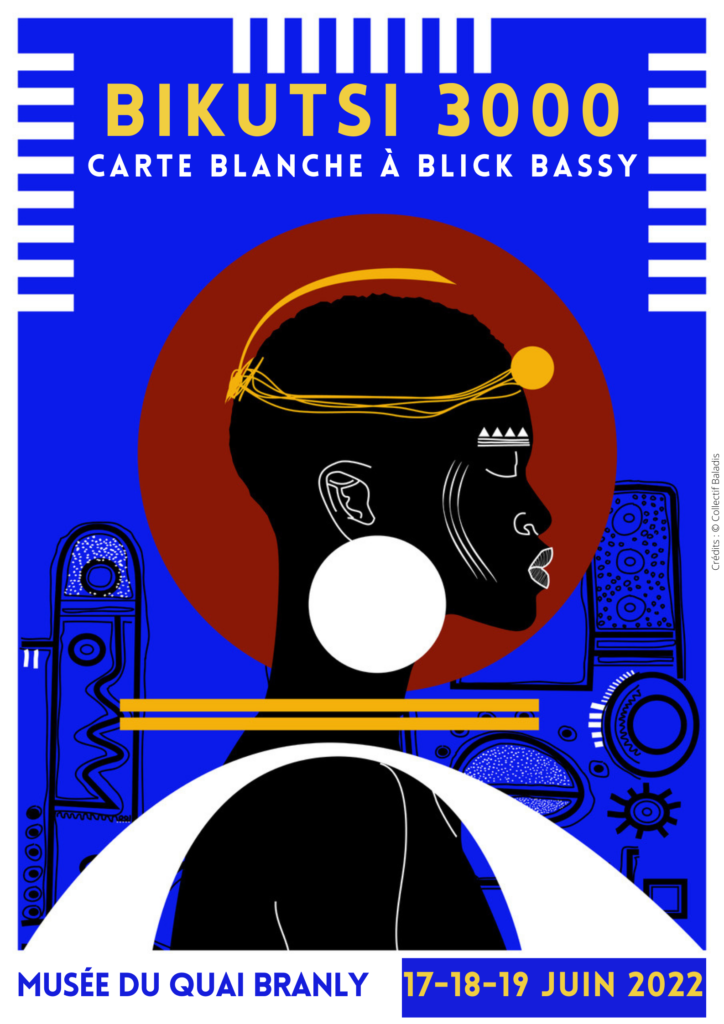 From 13th of May to 19th June 2022, the Quai Branly museum in Paris has offered a “carte blanche” to the Cameroonian singer-songwriter Blick Bassy in connection with the exhibition “On the road of the Chefferies of Cameroon. From visible to invisible”.

In each of his projects, the same idea underlies Blick Bassy’s work : how can Africa reconnect with its identity, emancipate itself from its colonial history, inspire its youth and invent its future ?

Blick Bassy proposes thus a short-film about Lullaby in Africa, an afro futurist danced tale to encourages emancipation of Africa, an interview of the instruments out of the collection of the museum, conferences and concerts.

“Future Lullaby: the lullaby of yesterday, today and tomorrow”

Broadcasted in a dedicated space within the exhibition “On the road of the Chefferies of Cameroon” at the Quai Branly museum, this short film immerses the audience in images and sounds from different eras that trace the evolution of the place of women and children within the family and the patriarcal societies in Africa.

Punctuated with original compositions from popular lullabies, this audiovisual creation takes the visitor into a revisited lullaby. Some elements of the cardboard scenery drawn by Guy Kouekam are presented in the room where the film is broadcasted to reinforce the audience’s immersion.

Based on a 35-pages essay entitled “1958” written with Andy Morgan (an English journalist at Songlines, The Guardian etc.) to accompany the release of the album of the same name, this talking-gig was presented at the British Library in October 2019 and in its French version with the lecturer and philosopher Nadia Yala Kisukidi at Quai Branly museum in June 2022.

Between musical interludes performed by Blick (solo), this lecture tells the story of Ruben Um Nyobè, a trade unionist and resistance fighter, murdered in 1958 by the French army. His crime was to have embodied the hopes of the Cameroonian people for a total independence from the colonial yoke. The war waged against the French by Um Nyobè and his party “Union des populations du Cameroun” (UPC) was one of the most violent in contemporary African history – and remained hidden for decades.

With his latest 1958 album, Blick Bassy seeks to restore the truth about the struggle for his country’s independence, and pays tribute to those who fought for the freedom of Cameroon. In this short work, the hidden war for independence is intertwined with Blick’s family history, and his initiatory journey towards knowledge of his country’s history and true identity.

Famous Cameroonese actor Emil Abossolo joined Blick to deliver a special day to the 3 instruments of the museum’s collection : they are released from the archive rooms and they are the stars on stage. Wearing costumes made by the famous designer hair couture Murielle Kabile, they speak their story and point of view of wise ancestors.

Between story and theater through a game of questions and answers, the instruments gives Emil the privilege to become a translator of their words, using him as an instrument in his turn, to speak of the ignorance of the human beings who think they can imprison them. To close this interview, an original composition made by Blick from the pre-recorded sampled sounds of the selected instruments is broadcasted.

Bikutsi is a traditional music and dance of Cameroon, practiced by Beti women to heal ailments, ease the pain of losing a loved one and relieve suffering. From this tradition, Blick Bassy has imagined an Afro-futuristic show between fiction and historical reality.

“Bikutsi 3000” tells of a futuristic and post-imperial Africa. Between fiction and history, the show consists of 5 dance scenes, located in the 5 countries which were colonized by Germany (Cameroon, Namibia, Togo, Tanzania, Rwanda-Burundi) between 1885, the year of the Berlin conference, and 2050, deeply expected as an emancipated and re rooted Africa. Blick’s story is brought to the screen, thanks to a video mixing archival images out of the Quai Branly museum collections and shooting of actors telling the tale, reinforced by the dancer’s performances.

From Cameroon to Namibia, via Togo, Tanzania and Rwanda-Burundi, we follow the resistance of Queen Nkolmesseng and her army through the centuries. With “Bikutsi 3000”, Blick Bassy proposes a manifesto, a feminist tale in which dance is an act of resistance, and women are actors of the emancipation of society.

The aim of this show is to recall the colonial history of these countries, to sensitize their populations to the urgency of reconnecting to their own cultural, educational and political models, and to rethink their development from their own perspectives. Through this artistic and fictional narrative, “Bikutsi 3000” wants to create a dynamic emancipatory of any form of imperialism, economic or cultural, based on resilience and above all the valorization of the cultural achievements specific to Africa.

Video report of the residency in Cameroon :  https://drive.google.com/drive/folders/1kNYCABIaA523U6MAj5tAm0pN63_jLHB-

“Djoss” the interview of instruments of the Quai Branly museum collection