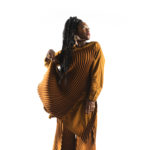 “MAMA FORGOT HER NAME WAS MIRACLE” New album to be released on March 11th   Born in Canada to Haitian parents and based in Paris, the singer looks on her relationship to the voodoo pantheon and her rituals to cultivate magic on a daily basis, mystical and musical rituals because according to her, “singing means praying twice”. Since her debut in 2008, Mélissa Laveaux… Read more →