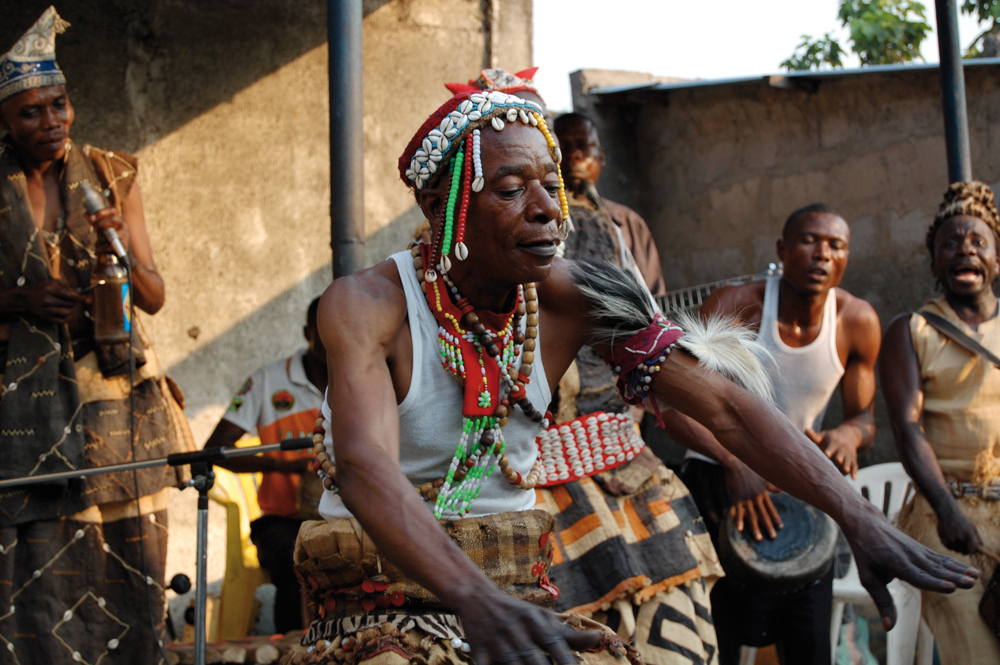 Deeply impressed by the music of Congolese collective Kasai Allstars, French-Senegalese director Alain Gomis drew inspiration from their music, and from the voice and character of their singer Muambuyi to write and direct his new fiction movie, entitled “Félicité“. The film’s eponymous protagonist is a proud, free-willed woman who sets out on a breakneck race through the streets of electric Kinshasa to save her son. Her profession: singer with Kasai Allstars!

The amazing Kasai Allstars, that collective which regroups members from several other bands, including Masanka Sankayi and Basokin out of Kasai (a Congolese province of the size of France), wrote and performed most of the soundtrack, and appears onscreen playing their own part. Muambuyi‘s voice is omnipresent, and is being heard everytime Félicité (played by Congolese actress Vero Tshanda) sings in the bars of Kinshasa, backed by Kasai Allstars.

The film was presented in competition at the Berlin International Film Festival 2017, where it obtained the Silver Bear Grand Jury Prize. It also earned the Golden Stallion at FESPACO (Panafrican Film Festival), and 6 awards at the Movie Academy Awards of Lagos. Theatrical releases in France & Belgium took place in March/April 2017, and other countries will follow in September/October 2017.

The “Around Félicité” album was released late March 2017, and it includes the film’s main pieces, performed by Kasai Allstars and by the Kinshasa Symphonic Orchestra (who specially arranged three works by Estonian composer Arvo Pärt), alongside new tracks by Kasai Allstars, as well as interludes consisting of fragments of dialogues and sound bites taken from the soundtrack.

“Around Félicité” comes with a companion piece: “Félicité Remixes“, a collection of 10 remixes of Kasai Allstars tracks by electronic music producers from Europe, North America and Africa, including reworks by Clap! Clap!, Daedelus and Africaine 808.

The previous releases on the excellent Crammed Discs and its famous Congotronics Collection directed by Vincent Kenis : In The 7th Moon, The Chief Turned Into A Swimming Fish And Ate The Head Of His Enemy By Magic in 2008, Tradi-Mods Vs. Rockers in 2010 (a multi-artist tribute album to the music of Kasai Allstars, Konono No1 and other Congotronics artists by Deerhoof, Animal Collective, Juana Molina, and more), and Beware The Fetish in 2014, were acclaimed by both the traditional and the electronic and indie rock music communities, all around Europe, the US and Japan.

Since 2008, the wild, trance-inducing, raw intensity of Kasai Allstars already rocked the stages of major festivals including Glastonbury, Roskilde, Eurockéennes, Couleur Café, Vieilles Charrues, Paleo, Fuji Rock, North Sea Jazz Festival etc. with its rhythm section (with drums, electric bass and 2 guitars) which brings a rockier foundation (Congotronics vs Rockers-style) to their mesmerizing Congolese trance music. The wild, driving rhythms and exhilarating vocals are further enhanced by spectacular dancing. Their live show is really something not to be missed !

in agreement with Crammed Discs

Endlessly inventive… otherworldly… a long, gleeful trip into the surreal (Rolling Stone, US)

Imagine if My Bloody Valentine had been produced by Lee Perry (Mojo, UK – 29th on the MOJO’s 50 Best Albums Of 2014 nearby Jack White, Beck, FKA Twigs, The War On Drugs, St Vincent etc. and first World music album in front of Seun Kuti and Tony Allen !)

A joyous whirlwind… Every track has the DNA of rock, blues or contemporary music embedded in it (Independent on Sunday, UK)

Some of the wildest and most unusual sounds on the planet… (The Guardian, UK)

This is rock sucked back to the continent of its birth to be granted a glorious resurrection (Word, UK)

Somewhere, Brian Eno exhales in delight at something close to his vision of a psychedelic Africa (Village Voice, US)